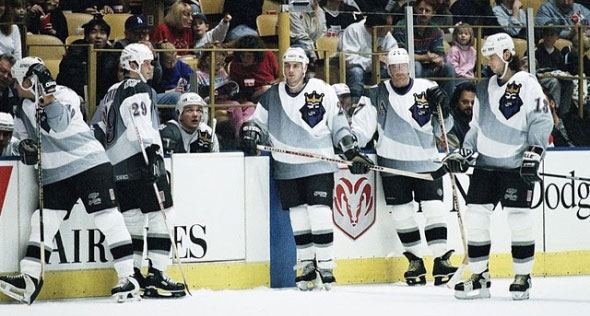 From the classic wool knitted jerseys to the polyester flexible water resistant uniforms designed by Reebok today, hockey jerseys have changed significantly over time. After 96 years of the NHL, here are three worst uniforms ever made.

For most of the franchise’s history, the Islanders have used the orange, blue and white uniforms with the classic NY logo. They made minimal changes year-to-year until 1995 came along, when the team made some drastic changes to not only the colour scheme of the uniform, but also the logo. The horrible result can be seen above. Sadly, the Isles used this uniform as their home jersey for not one, but three years. They eventually become known as the “Fisherman” jerseys.

Anaheim’s “Wild Wing” third jerseys only lasted a few games until they were retired because of the bad response they received. The jersey basically has another jersey on it. That’s not good.

Even the greatest player of all time, Wayne Gretzky, had to wear these hideous uniforms, known as the “Burger King” jerseys (primarily because of the logo). It lasted only one season.